All classes from St. Aidan’s took part in our recent fundraising Christmas concert . Each class performed at a matinee and evening show. Due to space limitation the concert was held over two days, on Wed 12th and Thurs 13th December.

Wednesday’s  show opened with a dance a routine, co-ordinated by The Redmond School of Dance and Mrs Hickey. 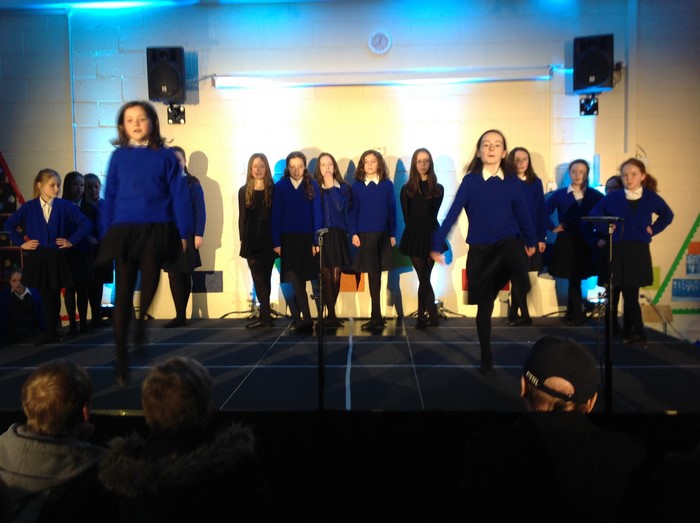 This was followed by Ms McCallion’s Senior Infants are performing Shine Star, Shine! This tells the story of the big star who needs to show the way to the stable where a special baby has been born but there’s one problem – he just can’t shine. His friends, the other stars, try all they can to make him believe that he can shine. The  Senior Infants showed us that baby Jesus’ love can give us all the strength to shine! 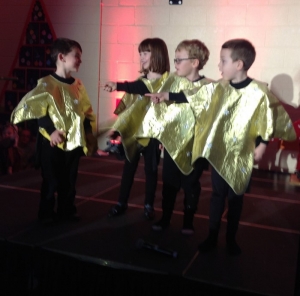 Next, Ms Lee’s Junior  Infants performed We Three Kings-a little play which follows the path of the three kings as  they follow the star and make their very long journey to Bethlehem with splendid gifts for the special baby. In the end they learn that love is the most splendid gift of all. It is a long trip and there are lots of naps needed with some loud snoring!! 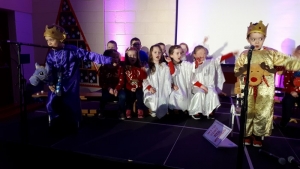 Ms Mc Neela’s  1st Class performed Ralph the Reinder. Poor old Rudolph had a terrible cold. Santa needed  someone to help guide the sleigh. Enter Ralph the Reindeer, who is eager for work and very willing to help, but at the last minute, we discover Ralph can’t actually fly. We saw how Ralph and Rudolph solved the problem and saved the day! 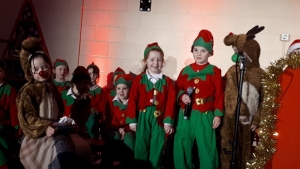 Wednesday’s concert concluded with the children in Ms. McNicholas’s 2nd class performing Peace on Earth! – a Christmas musical Nativity which ends with a heartfelt wish from the class. 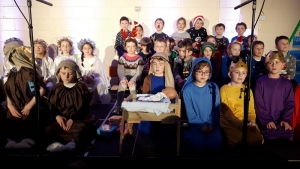 Thursday’s show opened with a two songs from St. Aidan’s school choir under the direction of Miss. Lee . 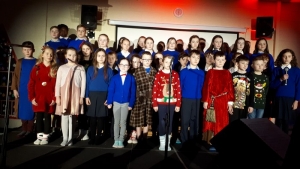 They sang :   Born is the Light of the World and Somewhere in my Memory

This was followed by Mrs Hickey’s 3rd class and Ms Nyland’s 4th Class . Their production- Lights, Camel, Action! revolved around a stable with a difference. For a special broadcast, the stable was set up with a dance floor and a judging panel. We were entertained by the Innkeepers, Camels, Angels, Shepherds and Wise Men, in a way not seen before! 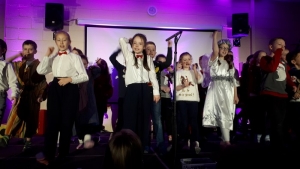 Mrs Mooney’s 4th and 5th Class item -‘St Aidan’s School of Rock’, was based, in parts, on the musical ‘School of Rock’. It is set in the very exclusive and expensive private school, Horace Green. The class performed 2 songs from the show and added some other favourites. 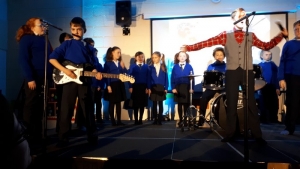 They have also spent the last month learning some of our 3rd National Language- Irish Sign Language. They signed one of the  songs -‘A Thousand Years’ by Christina Perri. We also saw a short video clip, produced by the boys in 5th Class, showing how they learned to sign with help from Sign language teacher, Tara McNally 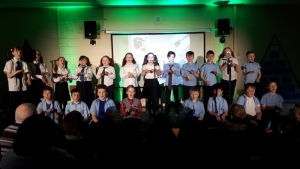 The final concert item was the 5th & 6th Classes production of ‘The Peace Child’ under the direction of Mr.Donnellan and Mrs McHugh.

This is set in the far-off and fictional land of Mambica. It involves two opposing tribes with different lifestyles and traditions. The Sotongi and Wannakeekee tribes are separated by a river and a lot of hatred. There seems to be little hope of making peace.When a TV crew from the Western world arrives, they decide to build a bridge across the river to film both tribes. War seems certain. Only the gift of a newborn son can bring hope and life to the land and its people. The gift of sacrifice from one chief to another marks a new beginning for all of Mambica. 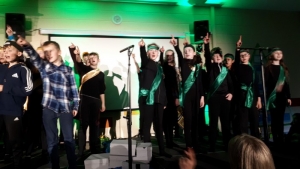 We all enjoyed the entertaining song, dance and dialogue  in this drama which had an underlying message for us all.

Thanks to  the school staff, members of The Parents Association,  all sponsors of raffle prizes and all who worked to make this concert a tremendous success.